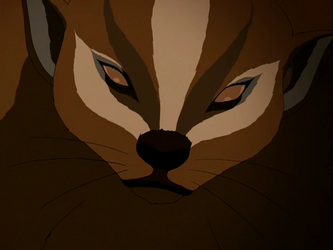 Badgermoles are gigantic blind mammals which inhabit The Land of Earth. Living mostly underground, they were the first Earthbenders, later teaching man the same art.

History
Badgermoles are responsible for teaching humans how to Earthbend. In order for Oma and Shu to meet when they were in love, they learned Earthbending from the Badgermoles. They and the Badgermoles created a maze of tunnels which had crystals on the ceiling that showed the way to each other. Their Earthbending isn’t just fighting, but more of an extension of their senses and their way of interacting with the world.

Due to the Badgermole’s importance in Earthbending history, they can frequently be found influencing architecture, such as the throne of the Earth King in Ba Sing Se and the two statues present outside of the Earth King’s palace.

Anatomy
Badgermoles are giant Earthbending creatures. They have brown fur with one white and two black stripes running down their backs and white, mask-like patches on their faces. They have long tails and five claws on each paw. Badgermoles use their noses to inspect objects in front of them. They then lick them to show their affection. They enjoy hearing music, which seems to put them in an almost tranquil state. The Badgermole seems to be the natural predator of the Wolfbats. Badgermoles use Earthbending to make tunnels and travel underground, where they hunt for prey and live. Although they have vestigial eyes (probably left over from some long-forgotten time when they spent more time above ground), Badgermoles are basically blind, but their Earthbending abilities allow them to feel the presence of their surroundings in recompense. If fully and properly tamed, Badgermoles can be used as beasts of burden and perform tasks such as paving pathways or clearing stone debris.